Tom Lisett, formerly Flight Lieutenant in the RAF, spoke to our Year 11’s on strategic defence tactics and weapon systems development to enhance their learning on the current History GCSE, ‘Warfare Through time’.  Tom spoke passionately and enthusiastically about his role and the use of weapons in war and responded knowledgeably to the numerous questions asked by the students. His engagement in Northern Ireland during the troubles as well as at Lynham working on Hercules aircraft during the Gulf war, brought a sense of gravitas and reality to the topic and really lifted the information from the page.  The students greatly benefited from his input. They responded warmly and with equal enthusiasm and such was his impact, many requested that he come back and talk to them again. It was a privilege to listen to such expertise and the minutiae of warfare, from the workings of a bullet to the dropping of the atom bomb and the use of drones in warfare, as well as the bigger picture of warfare and its complexities.  As a teacher, I was delighted to be a student again and it was a pleasure to be educated by such an experienced and engaging speaker. 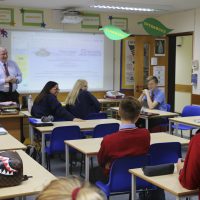 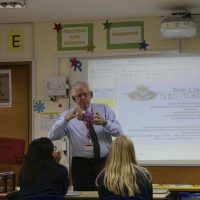 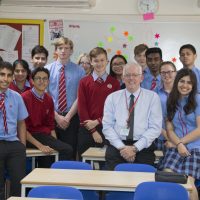